Should We Push Students Towards University Degrees? 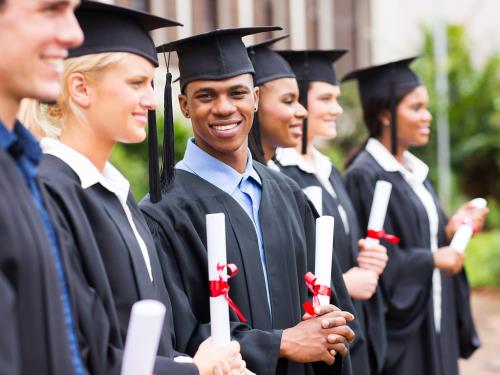 By their junior and senior years in high school, most students have an idea about whether they are college-bound, and if they are, what degree they are interested in earning. In fact, there is a very good chance they are currently taking optional high school courses that relate directly to the degree they are going after in the near future as a way to prepare.

However, as educators that care about a student’s future and ability to earn a living, should we usher them towards more sensible degrees than some of the ones they are choosing to take? Or would this be overstepping our role as their teacher? Perhaps it would be best to let their parents have a talk with their child on how tough it will be to make a living with a Liberal Arts degree. But the problem is that many parents do not have this discussion because they either don’t understand the degree itself or just want to allow their child to pursue their educational dream. Sometimes some cold hard facts are needed to wake everyone up so the current high school senior is not still living in their parents’ house ten years from now.

Don’t you wish your guidance counselor would have just told you straight out not to pursue various degrees in college because you won’t be able to support a family very well down the road? Instead, educators are often told to encourage students and their dreams. In doing so, though, we may be part of the problem instead of part of the solution.

One of my sisters (I have five of them) is currently 50 years old, has four degrees to her name that don’t make money, and either lives at home with the parents still or in cheap apartments because she wasted a lot of her time (and money) in college on degrees that don’t allow most to make a living. While meteorology can be interesting, are there that many opportunities for a career in the field? Maybe it would have been best to major in something else unless you wanted to be a television weatherman.

Sean Coughlan just wrote an article for the BBC about which degrees in the United Kingdom are the biggest earners and the biggest losers. For many degrees, Coughlan determined that the student would actually be losing money in the long run because there would really be no way to be recompensated for the amount they spent on taking these majors.

A few of the majors that were not bringing in the money years later, according to the stats in the article, were Creative Arts, Languages, English, and Biology. Other college majors that need to be lumped into this category are Humanities, Journalism, Music, Art, Theater, and Communications. While all of these majors probably offer interesting courses and areas of study, it might best be something to pursue on the side rather than place all your eggs into one basket.

If Going to College, Consider These Areas of Study

While there are certain majors you should avoid if you want to be able to support yourself, there are other majors that will allow you to make a pretty good living financially. One area of study is anything to do with medicine. There is always a demand for people in the medical field and it usually pays pretty well. In addition, if you have an interest in financing or economics, you are projected to earn a solid living in this field. Engineering is also an area to focus on if you enjoy being able to pay your bills.

There Are Other Options Besides College Nowadays

Many careers are available without degrees in today’s society. As we enter into more of a high tech world, people are entering career fields not based off of what a diploma says, but more off of what their experience is in the particular area. For instance, if you are a whiz on computers and coding, you could have a good job lined up even before you finish high school.

Furthermore, there are certifications you can achieve in mere months instead of years that will allow you to pursue a career much better than what a diploma may. Not only is a certification tens of thousands of dollars less, but it will also have you joining the workforce quickly. In many cases, you can learn a trade and get paid for it at the same time.

It’s Not All About Money

If you have a passion for an area of study that is more than likely not able to bring in a salary you can live comfortably on, I am definitely not telling you that you shouldn’t pursue it. You just need to know ahead of time what you are getting yourself into. Life is not as much about money as it is about experiences and finding something that you love to do. Trying to reach a balance of experiences and passion with suitable finances can be tricky to do. Enter into your future with a good head on your shoulders and you will have a fighting chance.