The start of term opens up the school uniform debate again 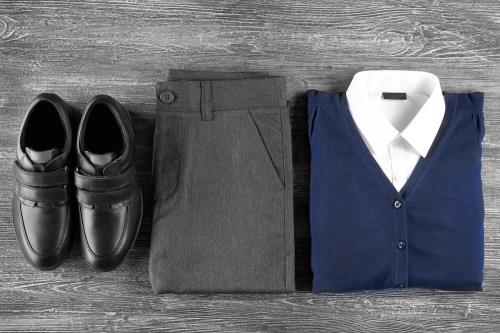 The start of term opens up the school uniform debate again

It’s become almost expected. Just as we know that Facebook will be awash with ‘Little Samuel’s first day at secondary school’ pics in the first week of September, we are also no longer surprised to read stories in the newspapers about scores of children being sent home during the first few days of term due to their failure to adhere to uniform rules.

It’s a familiar story. An irate parent will contact the local press – livid that the black ‘trainers’ they have purchased for their child have been deemed not to be ‘shoes’ by the school’s leadership team. A school statement will reiterate the rules and uniform policy; and the comments on social media descend into a full-blown argument between those parents supporting the school’s stance and those that believe that the school is being petty and pedantic. After all, does it really matter what shade of grey the skirt is?

What was once merely a favourite topic of Year 7 English lessons and speech writing – ‘Should school uniform be banned’ – is now being debated more by parents on social media. How have we got to this?

Well, it’s true to say that many schools – particularly academies – have gone ‘old school’ in recent years regarding several perennial and problematic school issues  – particularly uniform and behaviour. To some parents, this is going too far and represents a draconian step backwards. Meanwhile, others will support it and see such moves as an important way to bring back some much-needed discipline and respect to schools.

The thing is that school uniform is never going to be an issue that everybody agrees on. It seems to be something of a British obsession too. Across the UK, there are very few schools (primary or secondary) that don’t have a school uniform. However, the picture across the rest of Europe is very different. In France, Germany, Italy, and Spain there has never been the history and expectation that pupils should wear uniform. Likewise, in Finland – often cited as having the best education system in the world – pupils do not wear school uniform at all.

We all know the basic arguments in favour of school uniform. It creates an identity, it prevents the school day from becoming a fashion show for teenagers and saves poorer children of poorer families from potential embarrassment, or even bullying, because they are not decked out in the finest designer gear.

But these arguments – well intentioned as they might be – fall slightly flat and wear a bit thin when you look at what goes on in other countries. Don’t the same problems exist in these countries? Why is it that British schools seem determined to cling onto the traditions of uniform?

Nobody disputes the need for rules. However, being over-restrictive can lead to resentment. And, in the longer term, it can also contradict the goal of developing independence and independent-minded young adults.
Doesn’t the question need to be asked: Is school uniform really worthwhile?

2. School uniform: Why do we still bother with it?

4. Lack of support for longer school days and shorter holidays

5. Problems in schools cannot be solved with quick fixes

Are you a writer?  Would you like to write and have your article published on The Educator?

If you are connected with the education sector or would like to express your views, opinion on something required policymakers’ attention, please feel free to send your contents to editorial@theeducator.com